HMMH is celebrating Women of Aviation

As a women-owned business, HMMH is proud to highlight Women of Aviation Week. The global awareness week is both an opportunity to celebrate the first female pilot license and a call to address the gender imbalance in the air and space industry.

Women of Aviation Week kicks off on Monday, March 8. It was on this date in 1910 that Raymonde de Laroche became the first woman in the world to receive a pilot license. Though women have served an important role throughout aviation history, they are still largely underrepresented in today’s aviation and space industry. Women pilots represent about eight percent of the total pilot population. 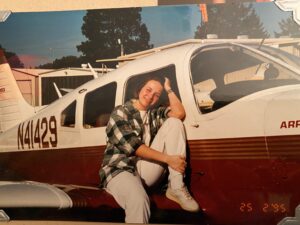 HMMH Vice President and Chief Operating Officer, Diana B. Wasiuk, is a member of Women in Aviation and an instrument-rated private pilot.

Diana, who specializes in federal programs and aviation at HMMH, said she has been fascinated by aviation and rocketry since preschool. Though she wanted to fly in the military, neither the Polish nor Swedish Air Force accepted women fighter pilots. But, she ended up getting her private pilot license from the FAA at age 17 in LaCross, Wisconsin, and her instrument rating in San Diego, California.

“I love the feeling of utter focus and presence when flying solo across the country,” Diana said.

In recent decades, more women have been joining aviation careers, but there is plenty of room for more women in the industry.

Join HMMH in celebrating and promoting women in aviation by constructing Pink Paper Planes on Monday, March 8. The organization, Women of Aviation Week, is aiming to set a world record for Most Photos of People With Pink Paper Planes.